A Defining Event in my Spiritual Awareness

What started me on my current path of believing that the unseen is on par with the seen? What events shaped my thought processes?

Having a doctorate in chemistry and working as a research scientist enabled me to be comfortable with the unseen. After all, electrons and their energy fields can only be measured, they are not seen by the human eye.

Eventually I transitioned from science to becoming a Feng Shui consultant. This lead me to   another level of working with unseen energies and their physical effects.

In-between that transition there were small and large occurrences that shifted my focus to the unseen and its interaction with the seen.

One event comes to mind as something of a WOW moment. It was a wonderful and useful manifestation in the physical world of spiritual influences, support and knowledge.

I had been experimenting with kinesiology or muscle testing as described in my book – almost anything I did at this stage was an experiment. I wanted to see if it worked or if I was just imagining things. 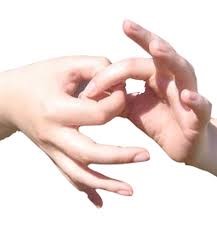 I used this technique to solve a very practical problem.

I was going to an interstate wedding with my boyfriend at the time. He is over 6 feet tall. We were late and he did not have the right attire to wear for his sister’s wedding.  The jacket he was wearing was fine – but the pants were not and he felt a bit uncomfortable about it.

We had half an hour to get to the airport. Given the situation I asked him what I knew would be a leading question. Would he trust my Kinesiology testing to stop off and buy a pair of pants at a mall we passed? He was rather desperate, so he said yes.

I tested for the store and we went in. I kept testing which direction to go in to find a pair of matching pants for his jacket. He went straight to the men’s department. I tested to go to the boys department which made me a bit nervous. However, I was committed and continued testing till I came to a rack of pants and one specific pair.

By this time, he had come around looking for me. He pulled out the pants I had selected with the kinesiology testing. They fit just fine as well as being a good match for his jacket. It took less than 10 minutes. They were in the children’s department – not where one would expect!

It really amazed me and made me think about all the stores and pants and sizes that we could have tried. That some unknown energy or being or force knew where to lead me in all the possibilities that existed. This was quite amazing to me at the time and of course something I never forgot.

This was a defining event simply because it could not be logically explained. There was no way around it – something more than our physical reality was at play.  The knowledge was very handy in the physical realm, as we caught the plane and all went well at the wedding.

The experience shifted my belief in the amount of information and support we can access on the unseen level.

Stay tuned for my weekly blogs!!! I would love your input as well.